Blog > Thailand > Koh Samui > When is the best time to visit Koh Samui? 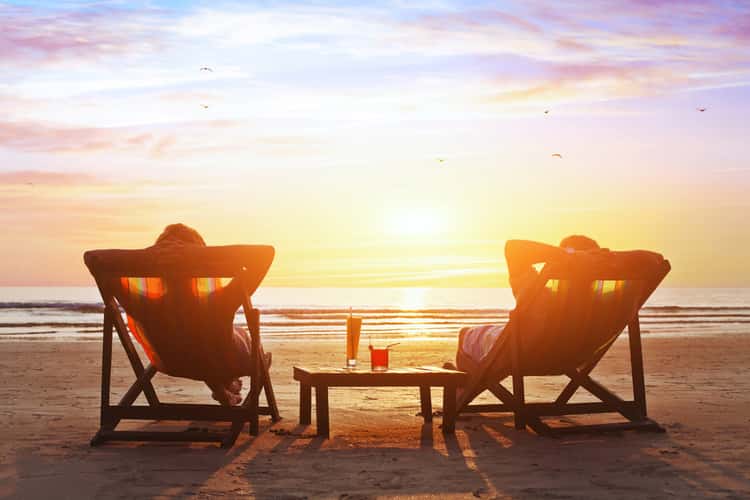 With its palm-backed beaches and balmy weather Koh Samui is a year-round vacation destination – nevertheless, it has distinct dry and wet seasons so it pays to plan for the weather in advance.

The best time to visit Koh Samui will depend on other factors too, like what you want to do, where you want to stay and how much you want to spend. Check out this handy month-by-month guide to give you an idea of what to expect through the year.

The weather in Koh Samui

Keeping warm is rarely a problem in Koh Samui with each month offering plenty of sunny days. Located off the east coast of Thailand between the Tropic of Cancer and the Equator, the island has a tropical monsoon climate with 3 distinct seasons; dry, hot and rainy.

The dry season runs roughly from December to March and is defined by warm weather, little rain and calm seas. Also known as high season, many consider this as the best time to visit Koh Samui for a beach vacation.

From April it’s the hot season in Samui with temperatures soaring well into into the 80s (around 30c). There’s an increase in rainfall with the weather following a pattern of hot daytime sunshine followed by cooling afternoon rain showers.

September through November sees the monsoon season and therefore the heaviest rainfall. Due to the unpredictable weather this may not be the best time for sunbathing or scuba diving but the upsides of visiting in low season are quiter beaches and lower accommodation rates. You’ll also find plenty of amazing activities to keep you busy on rainy days.

When to visit Koh Samui, month by month

January may be one of the coolest months in Koh Samui, but it’s also one of the most popular times to visit. It’s one of the driest months on the year with an average of 7 rainy days and the island stays warm with daytime temperatures in the high 70s (around 26c).

There are around 7 hours of sunshine per day in January and humidity is of little concern as conditions tend to stay consistently airy and pleasant. The sea is warm too, so you can enjoy swimming, snorkeling and water sports.

If you’re visiting Koh Samui in January be aware that it’s winter for those who live in the Northern Hemisphere so tourists will be flocking to the tropics to escape the cold.

Also, there are lots of people around following New year – the busiest time on Samui  – but it’s still a great time to go if you like a livelier vibe. From the second week though, as schools resume, Koh Samui really quietens down.

If you’re looking for warm, dry weather then February is one of the best times to visit Koh Samui. It has the lowest levels of rainfall than any other month of the year, and what’s more, it’s a good few degrees warmer than the preceeding months.

If it rains at all, showers are usually light and quickly followed by clear sunny skies. The sun shines for a good 8 hours a day throughout the month and the sea is beauifully warm and calm.

February is one of the best times to visit Koh Samui if you fancy a winter getaway. While it’s a busy time on the island you can avoid the worst of the vacation crowds if you travel during school time rather than in the UK’s half term holidays.

Don’t forget it’s Valentine’s Day on February 14 making it an ideal time for a romantic trip. You’ll find plenty of romantic things to do with your better half including sunset cruises, couple’s massages and romantic dinners on the beach.

March is one of the best times to visit Koh Samui with its great combination of low rainfall and lots of sunshine. Temperature-wise you should expect averages of around 83F and sea temperatures that are bath-warm.

Beach vacations are a good idea in March with an average of 8 hours sunshine per day. It’s a great month for other pursuits too like mountain biking, off-roading to a mountain top and elephant trekking throught the forest.

Throughout March and into mid-April it’s Spring Break for vacationing college students so you should expect the island to be busy. If the idea of partying students doesn’t appeal to you consider avoiding the main tourist areas like Chaweng.

If you’re visiting Koh Samui in April you’ll be contending with the Easter and Spring Break crowds, plus you’ll be in town for the lively Thai New Year festival.

However, given the extra heat and humidity, few tourists venture far from their air-conditioned villas during the hot afternoons. Daily temperatures can reach 84F+ which means that the sea and swimming pools are beautifully warm for swimming, although you may have little interest in strenuous activities like hiking, biking and exploring.

If you’re wondering where to stay why not consider renting a private villa? You’ll find some great deals during the latter half of the month with the added perk of private facilities and air-conditioned rooms.

With the hot season firmly in place, May is a fantastic time to visit Koh Samui. May is the hottest month of the year, plus it’s pretty quiet compared to July and August which is when families arrive for their summer vacations.

On average, rainfall is slightly heavier with around 9 rainy days, but although heavier, showers still dry up pretty quickly. Temperatures can be anywhere between 85-91F throughout May so you’ll welcome the cooling rain showers when they come.

Sun-seekers will love the hotter daily highs, especially with the abundance on water-based activities on offer. There are plenty of other advantages to visiting at this off-peak time including lower fares, quieter facilities and a better chance to appreciate the island’s laid-back way of life.

The month of June sees average temperatures of around 84F which makes it the second-hottest month of the year together with April.

There are around 9 days of rainfall expected in June, but any showers are a welcome break from the heat, giving you an excuse to cool off in a beach bar with a good book and a cold Thai beer.

June is regarded as the beginning of peak season in most resorts especially towards the end of the month when many students embark on their summer vacations.

July is one of the best times to visit Koh Samui for a summer vacation. The island is at its busiest and best with families flocking in from all over the world. The average temperature in July is 83F and there are around 9 days of rainfall.

If you’re planning on visiting Koh Samui in July, be prepared for the humidity which peaks at midday. Plan any sightseeing for the mornings and evenings, and stay in the shade through the afternoon.

There are 6 hours of sunshine per day in July and it also tends to get pretty cloudy. July is nearing Samui’s monsoon season which runs from September through November.

Like all other summer months in Koh Samui, August is a very hot time of year. Temperatures are the same as June and July, and the average highs and lows don’t change much throughout the course of the month.

As August creeps towards the wet season it recieves its fair share of rainfall, but there are plenty of rainy day activities to keep you entertained. Most restaurants, including those on the beach, have rain screens. You can also hit the shopping malls, chill out at a spa or take a Thai coooking class. 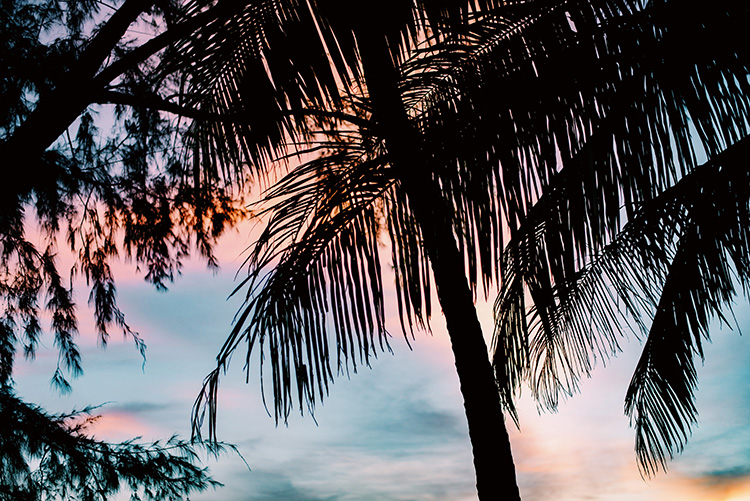 For many travellers, September is one of the best times to visit Koh Samui. After the summer holidays everyone has returned to the real world so you’ll get the beaches pretty much to yourself.

There’s still a while until the heavy rain of November so you’re likely to get a good number of sunny days, and even if it does rain there are still loads of ways to have fun.

You can soak up some culture rather than sun rays at a famous temple like Wat Plai Laem or check out a Muay Thai match at various locations across the island.

Don’t fancy heading out? Consider your rainy days as a chance to chill out and watch all your favorite movies in the comfort of your Koh Samui vacation home.

October is one of the wettest months of the year in Koh Samui – you’re likely to see some rain on around half of the days. It could be a downpour that lasts for just a few minutes, or it could be a continual rainfall for a few hours.

Despite the rain, October can still be a good time to visit Koh Samui as even with the showers there’s still around 6 hours of sunshine per day. It’s still the low season too, so you can expect lower prices, however they usually creep up during the UK’s half term week.

November is the last official month of the monsoon season. It’s also edging towards the busiest time of the year with visitors flocking in to the resorts in search of some winter sun.

Despite this officially being classed as winter, average daily temperatures still hover at 80F and the evenings stay warm too.

Rain aside, November is one of the best times to visit Koh Samui before the Christmas crowds arrive. You can take advantage of the fantastic shopping malls and stock up on Christmas gifts ahead of time.

The start of the dry season in Koh Samui, December is an exciting time to visit. Christmas is on the horizon and school is out at the end of the month so there are some fantastic vacation options to choose from.

Visit in early December and you’ll get gorgeous weather and lower prices than in the holidays. Go later in the month and you’ll get to spend Christmas and New Year on the beach.

Daytime temperatures in December are around 80F so it’s a great time to go if you want pleasant conditions as opposed to the oppressive heat of summer.

If you’re thinking of booking a Koh Samui vacation and you need advice on the best places to stay then contact us today. Additionally, our dedicated concierge team can arrange any added extras you need such as great-value car hire.