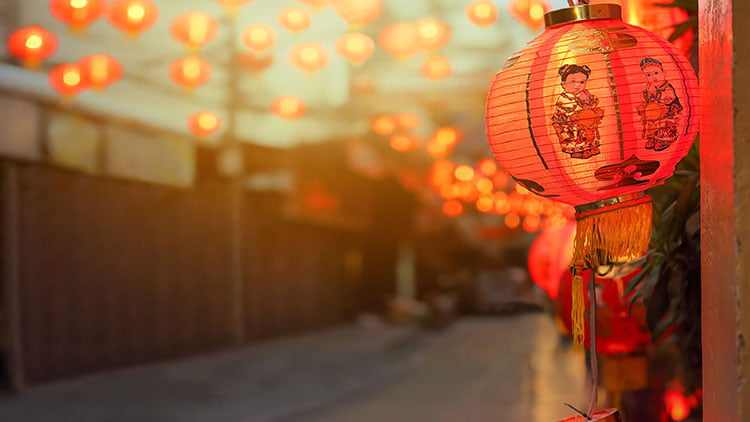 Planning a trip to Koh Samui during Chinese New Year? Here’s a guide to what’s on and when. Whether you want to party on the beach or join a dragon procession around Samui’s most fascinating shrine, this round-up of things to do is sure to keep you occupied. 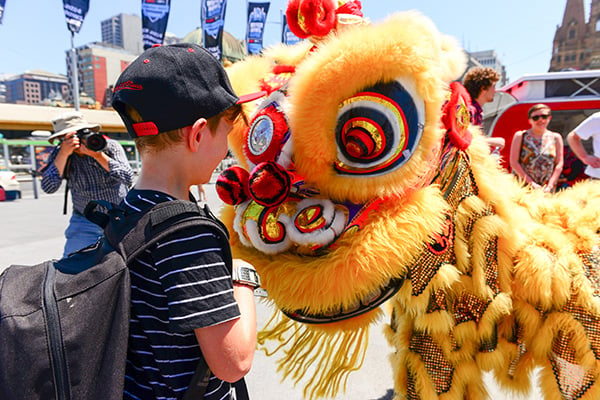 While Chinese New Year isn’t a public holiday in Thailand, it is very much in evidence in the lively parades and parties across the country. Many of Koh Samui’s residents have Chinese heritage, so celebrations are a genuine cultural event on the island, with plenty of fun guaranteed. Thanks to the great weather and the colourful celebrations, it’s one of the best times to visit Koh Samui.

When is Chinese New Year in Koh Samui?

The exact date varies from year to year because it depends on the Chinese lunar calendar and the night of the full moon.

In 2018, Chinese New Year in Koh Samui is set to kick off in mid February, just after Valentine’s Day. Not only are there endless festivities to enjoy, there is also guaranteed good weather, with lots of sunshine and barely any rainfall.

Celebrations will kick off on February 16, with a long weekend of street processions, parades and parties around Koh Samui’s temples, beaches and main towns. 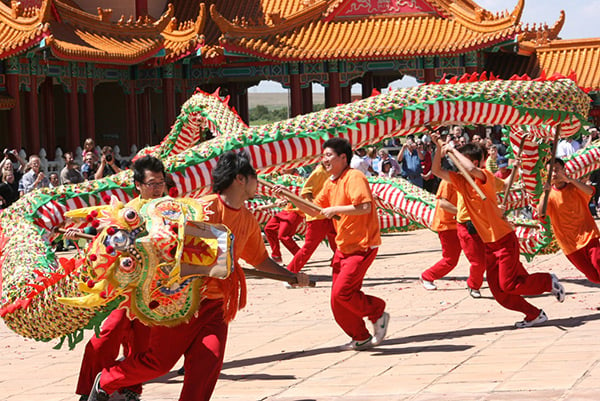 What exactly is Chinese New Year?

You may have heard of Chinese New Year but you may still be wondering what it’s all about.

Also known as ‘Spring Festival’, it’s the most important of all the holidays for Chinese people. Not only does it mark the start of the new year, it’s also a time to celebrate family, friends and Chinese traditions, with parties, special meals and gift giving.

It all started centuries ago with a legend about an evil dragon called Nian.

According to folklore, the creature would visit Chinese villages once a year, destroying the local harvests and terrorising the villagers and livestock. One year, the villagers hid from Nian, while a brave old man sought to scare him off by hanging up red decorations and firecrackers. The villagers waited in hiding, and when they returned to the town they found that, to their amazement, nothing had been destroyed. Nian had fled, frightened off by the colour red and the loud noise of the firecrackers exploding.

This is why the colour red is found everywhere during Chinese New Year – it’s regarded as the colour of hope, good fortune, and a deterrent for evil.

During Chinese New Year in Koh Samui, you’ll see red decorations hung in abundance across the island. Shops and markets sell red items of clothing to wear, and some houses may even be painted red! 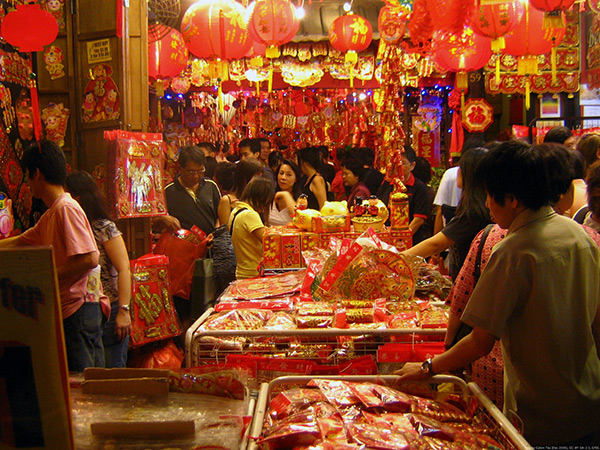 Where are the best Chinese New Year events in Koh Samui?

One of the main focal points for Chinese New Year in Koh Samui is the Chinese Temple in Maenam. This is one of the most family friendly events, packed with tourists, locals, street vendors and even people’s pets.

Close to Maenam pier, this colourful temple is the site of the most spectacular street procession on the island, with a dragon parade, a lion dance, acrobats on stilts, music, dancing and fireworks. There are evening performances from around 6pm each night of the festival.

Look out for the the lion dance which is particularly fun to watch, performed by dancers inside an elaborate lion costume, rather like a pantomime horse. The performers become the body of the lion, with one dancer at the head and one at the back, imitating the animal’s movements, to the tune of beating drums, clashing cymbals and resounding gongs.

There is a wide choice of local Thai and Chinese food available at the endless street stalls, as well as both soft and alcoholic drinks, including plenty of cocktails. You should expect to see red lanterns everywhere, as well as red items and tangerines (symbols of wealth and happiness) being sold at market stalls. 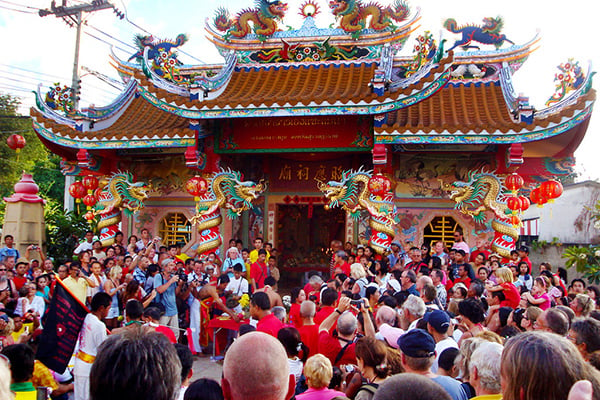 The Chinese Temple in Maenam

Nathon, Samui’s capital city, tends to have less of a tourist presence than Maenam, so you can expect a smaller-scale but perhaps more authentic Chinese/Thai party taking place around the Hainan Chinese Temple.

There are the usual dragon and lion dances, but the Nathon celebrations are more adult-orientated, with some local participants performing cheek piercing and tongue slashing ceremonies that are not for the faint hearted.

Many of the homes and shops in Nathon leave special ‘altars’ loaded with food and lucky charms outside, ready for the passing procession. You’ll find everything on these from oranges and other fruits to firecrackers, meat and even pigs’ heads. 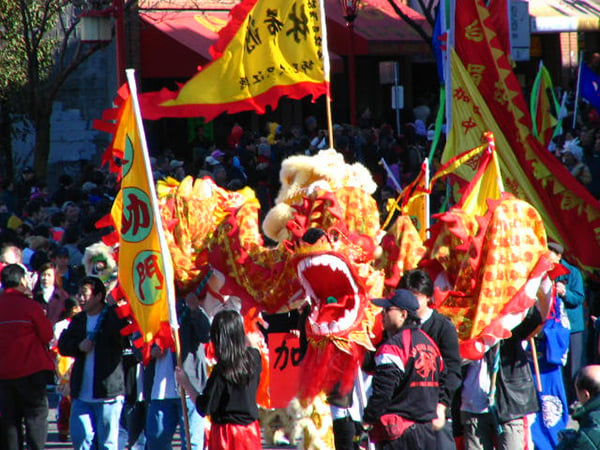 Just like in Nathon, you can expect some serious revelry near the massive Guan Yu shrine in Hua Thanon.

Known as Koh Samui’s ‘scariest’ shrine, this towering temple is themed around the red-faced Guan Yu warrior, and is the main focal point for the Chinese community in Samui.

You can also learn more about the story of the famous Guan Yu Chinese general while you are at the temple. Thought to have lived some 1,800 years ago, Guan Yu played a crucial role in the civil war that led to the beginning of the Three Kingdoms period. His heroics are sensationalised in some of the greatest works of ancient Chinese literature, and he now represents loyalty, bravery and honesty among Chinese people.

It’s hard to miss the soaring Guan Yu shrine, located off the inland side of the ring road in Hua Thanon village. Look for a red gate on the right if you miss the looming red head on the approach.

Know before you go