Disney World vs Disneyland – which is better? It’s the question that Disney fans have been debating for decades.

In the United States you can choose between Disney World in Orlando, Florida and Disneyland in Anaheim, California. While both destinations offer heaps of Disney magic, they have many differences other than their locations. Here’s a look at how they compare:

The most obvious difference between Disney World and Disneyland is the size. When it first opened in 1955, Disneyland in Anaheim was just a single park. In 2011, a second park opened and together they make up the modern-day Disneyland which has expanded to become an approximately 500-acre resort destination. 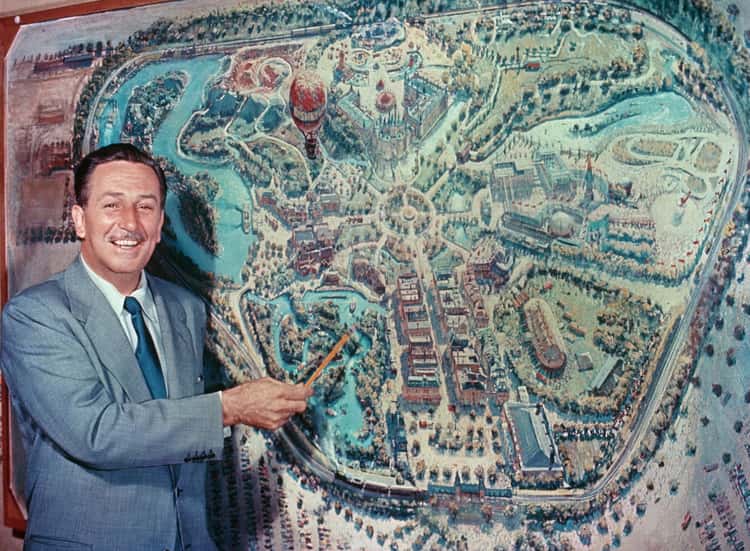 Walt Disney unveils his plans for Disneyland in 1954

In the mid 1960s the Walt Disney Company acquired more than 25,000 acres in Central Florida and planned a world of Disney entertainment like no other. The Orlando-based resort occupies a whopping 40 square miles of land – that’s about twice the size or Manhattan or roughly the size of San Francisco.

Disneyland has 2 theme parks (Disneyland Park and Disney California Adventure), 3 hotels and the Downtown Disney shopping and dining neighborhood. It also has parking areas for both guests and staff.

While both resorts are located in year-round sunny climates, one major difference between them is their location. The California resort is in Anaheim, surrounded on the western side by the Downtown Disney entertainment district and on the other 3 sides by public roads that are packed with shops, restaurants and hotels.

The Florida resort is located in a sprawling purpose-built area in Bay Lake and is surrounded by scenic land that is owned by the Walt Disney Company. Despite its vast boundaries, Disney World is just a 30-minute drive from Orlando International Airport and 20 miles southwest of Orlando. 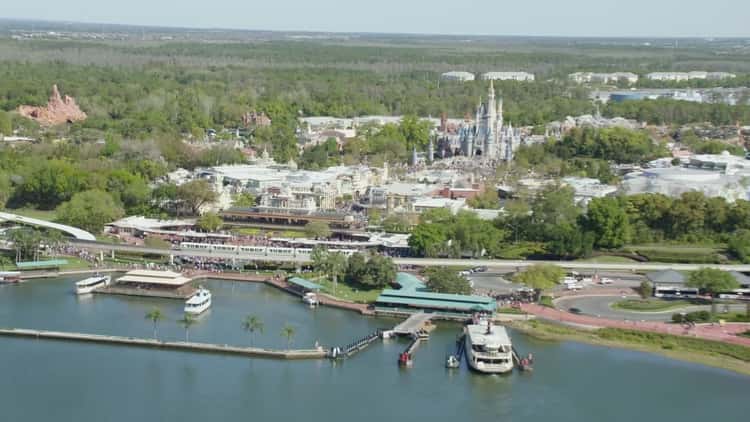 Given Disneyland’s much smaller size, getting around is a breeze. The hotels are all within walking distance of parks, and the entrance gates to both parks are about 100 yards apart. If you buy a park hopper ticket (which lets you enter both parks in one day) it’s relatively easy to walk from one end of Disneyland Park to the far end of California Adventure.

There’s a monorail at Disneyland which runs between Tomorrowland at Disneyland Park and the Downtown Disney district but it serves as an attraction rather than a mode of transport.

At Disney World on the other hand, it’s pretty much impossible to get around in a single visit. The parks are huge (Animal Kingdom alone covers 500 acres), so even if you purchase a park hopper ticket you may find it a struggle to get around more than one park per day.

If you would like to visit multiple theme parks, you can take advantage of Disney World’s complimentary network of monorails, buses and boats. Be aware though that these require long waiting and travel times.

Another big difference between Disney World and Disneyland are their histories. The Anaheim resort was Disney’s original theme park and the only one built under Walt Disney’s direct supervision. Because of this, it has more of a classic feel and many fans have a sentimental attachment to it. He even rode some of the rides. The Disneyland Railroad, which gives guests an overall view of the park, was Disney’s personal favorite. 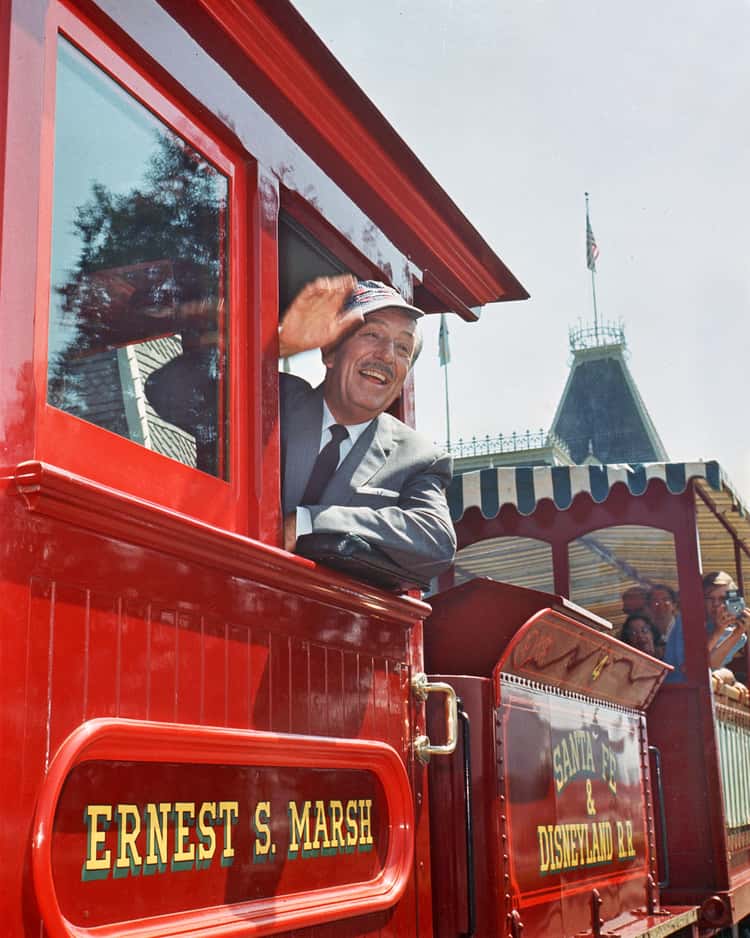 Over on the other side of the country, Walt Disney had grand ideas for his ‘Florida Project’, however he did not live to see the opening of Disney World in 1971. He died on December 15, 1966, and his brother Roy took over construction of the park.

Disneyland’s Sleeping Beauty Castle is the original Disney castle and the favorite for many theme park enthusiasts. Located in the Magic Kingdom, it stands at 77 feet tall and features a walkthrough with winding passageways, 3D displays and stunning special effects.

Cinderella Castle at Disney World is more than twice the size of Sleeping Beauty Castle in Anaheim. It stands at a soaring 189 feet tall and is the first thing you see when you enter Magic Kingdom park.

It may surprise you to hear but there are no water parks at Disneyland California. You’ll find water-based rides such as Grizzly River Run and Splash Mountain but if you’re after some full-on water park fun then head to Disney World for its 2 huge water parks.

Ranked as some of the best water parks in the world, Disney World’s Blizzard Beach and Typhoon Lagoon offer hundreds of family friendly thrills and spills. Admission isn’t automatically included in your ticket price – you have to purchase water park tickets separately or add them as an option.

Disneyland Park and Magic Kingdom are both very similar in terms of layout and attractions. Both have classic rides Space Mountain, Splash Mountain, Big Thunder Mountain Road, Pirates of the Caribbean and the Haunted Mansion. Both also have a scenic Main Street that leads to the castle in the middle of the park.

However, even these 2 similar parks have many differences. Disneyland Park has the Indiana Jones Adventure and the Matterhorn Bobsleds: Magic Kingdom has the Seven Dwarfs Mine Train and the Carousel of Progress, an audio-animatronics show that Disney designed himself.

If it’s speed you’re after, Disney World claims the fastest ride: Test Track. Guests get to design their own virtual vehicle then take off on a banked track where you can race at speeds of 60+ mph. The rates of acceleration combined with the special effects provide an instant adrenaline rush.

Over at Disney World, one-of-a-kind-rides include Spaceship Earth, World of Avatar and Kilimanjaro Safaris. The new Toy Story Land is also set to open at Disney world later this year.

If you’re comparing Disney World vs Disneyland in terms of rides, there are about 30 attractions which are unique to Disneyland compared to around 26 at Disney World.

Like the rides, you’ll be able to see some of the same shows at both parks including Fantasmic, Turtle Talk with Crush and It’s Tough to be a Bug.

Only Disney World can lay claim to shows like Happily Ever After, Illuminations, Mickey’s Philharmonic, Beauty and the Beast Live on Stage and Finding Nemo the Musical.

Unique shows at Disneyland include Remember Dreams Come True, World of Color and Frozen Live at the Hyperion.

The shopping and entertainment

The shopping districts at both parks used to be called Downtown Disney. However, in 2014 the Orlando-based district began a massive renovation and in 2015 it was re-named as Disney Springs.

Both locations offer plenty of shopping, dining and entertainment options, however Disney Springs is triple the size of its Californian counterpart. In addition, it hosts many attractions that you won’t find at Downtown Disney, such as Characters in Flight and La Nouba by Cirque du Soleil. 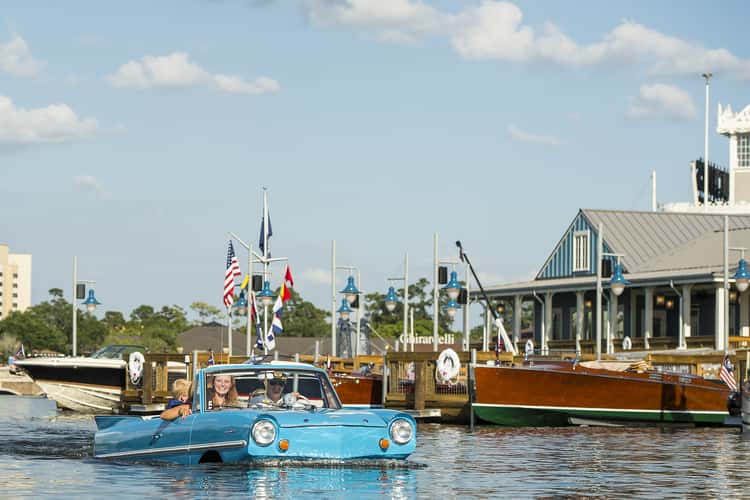 The Boathouse restaurant at Disney Springs

The amount of time you need

The best time of year to visit

If you’re booking a vacation, another thing to consider is the cost. Generally, the cheapest time to go is outside of term time and federal holidays. While it’s notoriously expensive and hectic to travel during school holidays, you’ll make great savings if you buck the trend and go off peak.

For both resorts, buying tickets can get a little confusing. Both offer a one-park-per-day ticket option or a park hopper ticket, which allows you to visit multiple parks in a day for a slightly higher rate. At both parks, the per-day cost of tickets decreases when you buy a multi-day ticket.

Things get a little more complicated at Disney World, where ticket prices come in three tiers: value, regular and peak. Basically, if you visit on the most popular days you’ll pay more than if you visit at less crowded times like weekdays. At Disney World, Magic Kingdom tickets are slightly more expensive than tickets to the other three parks.

Disney’s ticket prices are often beaten by specialist ticket agents so it pays to shop around when buying your passes.

The Fastpass system enables you to hold reservations for your favorite rides and attractions without the hassle of waiting in long lines. This is available at both parks.

Disney World offers Magic Bands which are wristbands that allow you to electronically check-in to rides and attractions with a mobile app, while Disneyland in Anaheim still offers Fastpass paper tickets. 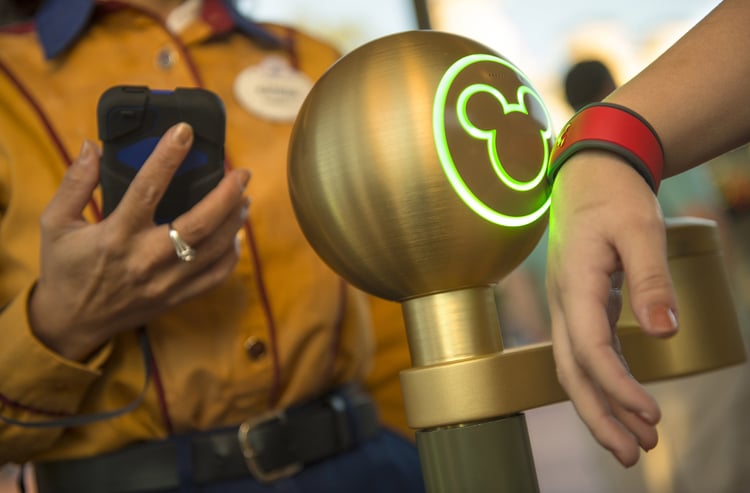 Disneyland is no slouch when it comes to dining either. It offers more than 8,500 food items across its myriad food and beverage locations – and many chefs are graduates of prestigious culinary schools.

Whether it’s Mickey Mouse and the gang, fairytale princesses or all your favorite Pixar characters, you’ll spot plenty of familiar faces at both resorts. There are a lot more of them in Florida though. Disney World employs a whopping 74,000+ cast members, compared with Disneyland’s 30,000.

For Star Wars fans, Disneyland and Disney World are pretty much on par. Both parks offer Star Wars Launch Bays, Jedi Training and unique character experiences. At the time of writing, both resorts are planning new Star Wars lands.

At Magic Kingdom in Orlando, guests are actually walking on the second level of a vast underground structure. Below the park is a network of tunnels that house offices, staff quarters, cleaning facilities and more. They are also used to transport goods through the park so it doesn’t spoil the magic for guests. Disneyland in California does not have these underground tunnels.

Disney World boasts 3 championship golf courses and 1 beautiful 9-hole course. The Lake Buena Vista course in Disney Springs has hosted the PGA Tour, the LPGA Tour and USGA events. The Magnolia course is certified as a Cooperative Wildlife Sanctuary and is 4-star rated by Golf Digest. If you’re not up for the bigger courses, Disney World also offers 3 miniature golf courses. You can also go golfing in California, just not at Disneyland. 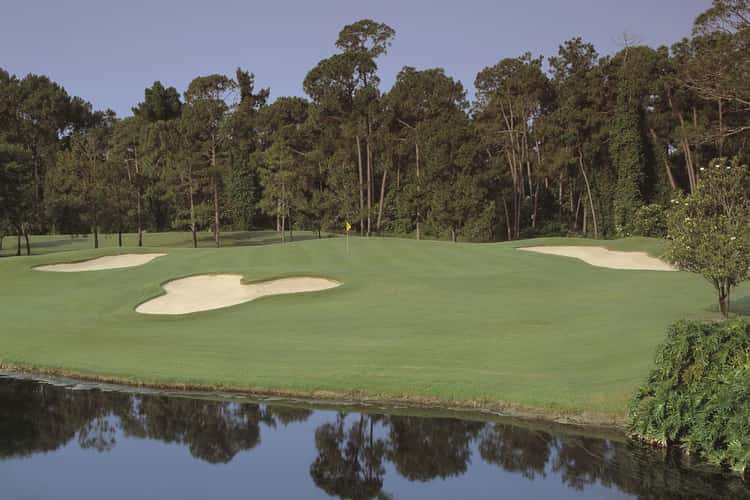 If you’re thinking of booking a Disney vacation and you need advice on where to stay then contact us today. Additionally, our dedicated concierge team can arrange any added extras you need such as great value car hire and attraction tickets.