When is the best time to visit St Martin to make the most of your vacation on this gorgeous Caribbean destination? Enjoy year-round sunshine across the island, from the soft, white sands of Orient Bay to the colorful streets of Philipsburg.

A small island south of Anguilla, St Martin is a terrific destination for those looking for phenomenal beaches and a marriage of European cultures and Caribbean flair. The island is shared between its northern French side and its Dutch side to the south, known separately as Saint-Martin and Sint Maarten. With warm weather all year round, it is a popular winter sun destination.

When planning a St Martin vacation, it’s important to choose the perfect time to suit your visit. There are many key factors to consider, including the weather, the busiest times of year and hurricane season as well as some entertaining events. Follow our easy weather guide and calendar of events to work out the best time to enjoy a stay on this exceptional Caribbean island.

Make the most of the St Martin weather

St Martin boasts a mild tropical climate throughout the year and an average of eight hours of daylight. Temperatures don’t tend to vary more than 5 degrees and stay close to around 80°F (30°F). As the island only has an area of 37 square miles (96 km²), the weather is consistent from coast to coast. However, if you stay on the Atlantic side of the island, you may encounter greater winds, and therefore more rain.

St Martin’s temperate climate is ideal for a vacation at any time of year but, if you wish to avoid scattered showers on your getaway, it’s a good idea to travel during the drier months. The island’s driest months are February and March whereas September sees more rain. To enjoy clear skies, the best time to visit St Martin is the early part of the year.

If you’re looking for a little bit of everything, April through June is an ideal time to travel. These months offer mostly clear skies, sun, and lack the crowds of the high season. Businesses will still be open, unlike later in the year when they shut down for hurricane season.

When is the St Martin hurricane season?

The Atlantic hurricane season runs June through November and is the period during which St Martin sees the most rainfall. However, the chances of a hurricane directly hitting the island are relatively slim, and it is unlikely that you’ll experience a storm during your stay. One of the worst and better known hurricanes was Irma, but it only lasted a day.

Due to nearby tropical storms, greater winds lead to increased rainfall, especially on the Windward side of the island. That said, the island doesn’t experience particularly heavy rainfall, only appearing as scattered showers for 5 to 10 minutes and only around 13 days of the month in the wettest period.

It’s worth noting that the island is extremely quiet during the summer and is an opportunity for residents to enjoy local celebrations. Also, due to the rain, the island is much greener. So if you’re willing to take the risk, you’ll be rewarded with a slice of paradise and culture.

January is one of the most popular times for visitors to St Martin. The month boasts modest temperatures in the high 70s (around 25°C) and a low chance of showers, with only three inches of rainfall. It’s a great month for those traveling from the northern hemisphere aiming to avoid colder weather.

As it is such a busy month for tourists, the beaches are likely to be the most crowded in January. Also, due to the cooling tradewinds, which provide relief in the hotter months, swimming for long periods of time may get a little chilly.

February sees many of the same benefits as January in terms of warm temperatures and low chance of rain. At the start of St Martin’s brief dry season, the month has fewer rainy days than January – around 8! There is also typically a slight dip in the number of visitors to the island.

If you can squeeze a vacation in during February you might beat the crowds to a sunny spot on the beach with little chance of rain.

March is the driest month of the year with only an average of 1.8 inches of rainfall. As such,

The number of tourists picks up for another busy period on the island. Temperatures also begin to rise slightly up to around 80°F (27°C).

April is a great time to catch the island as it becomes less populated by tourists, but still has all the fantastic amenities of the tourist season.

Visitors to the island in May may experience a brief rainy period. May showers are expected on 10 days throughout the month with up 3.9 inches of precipitation. The temperature continues to increase towards the heat of the summer months as the tradewinds ease off.

It’s worth remembering that rain on St Martin arrives in the form of scattered showers that last only a few minutes, so it shouldn’t distract from an otherwise sunny day.

June marks the beginning of the Atlantic Hurricane Season. However, more frequent rainfall and storms occur in later months of the year. June actually has a middling chance of rain with only around 2.8 inches. In addition, temperatures rise into the low-80s (around 28°C).

June is recommended as a quiet summer month to stay in St Martin just before the island begins to close down for the off-season.

In July, a few establishments may close for maintenance as the low season begins. The weather remains fairly consistent to June and the worst of hurricane season is yet to arrive.

July can also be a popular time for European tourists looking for a summer vacation.

The temperature rises, as high as the mid 80s (around 30°C), as does the rainfall. Although the likelihood of a direct hit from a hurricane during your stay is quite low, there is a much higher chance of nearby storms which may increase the downpour. Visitors to St Martin at this time can expect around 4.5 inches of precipitation and twelve rainy days.

Many establishments will be closed around this time, but, if you can find an open restaurant, it will be easy to find a table.

Wet and humid, September is the least popular for tourists, and for good reason. The month has the most sweltering temperatures, with an average of around 83°F (28°C),and high levels of precipitation. Due to storms, there’s an expected thirteen days of rain in September leading to nearly as much as five inches of rainfall.

September is not the best time to visit St Martin, but if you do travel at this time you may have your plans interrupted.

The rains ease off slightly in October but still with frequent showers. The climate is very similar to August with high temperatures in the mid to high 70s (around 25°C) and only 12 rainy days.

Atlantic Hurricane Season comes to an end at the end of November and traffic to St Martin begins to pick up again. However, rainfall is historically the highest in November – a final deluge before the hurricane season breathes its last. The cooling tradewinds return to the island to bring fresh air and a temperate climate after a stormy few months.

December is a great time to visit the island, especially for memorable holiday celebrations. The temperature and rain returns to similar weather to January. The temperature averages around 78°F (25°C) and there’s only around  3.5 inches of rain.

Remember that St Martin is an exclusively sunny island, so there’s no chance of a white Christmas.

Before choosing the best time to visit St Martin, it may be worth checking the island’s packed calendar of events:

Mardis De Grand Case | February
Experience a celebration of the colorful culture of St Martin in the village of Grand Case, at the height of the tourist season. Discover local cuisine, crafts and vibrant Caribbean music.

Carnival – French | February – March
Celebrate Mardi Gras, the king of carnivals, with a fantastical parade through the streets of Marigot, Saint-Martin. Watch in awe as the costumed dancers move to the rhythmic beat, showcasing the cultural heritage of the island.

Heineken Regatta | March
On the first weekend of March, St Maarten welcomes teams of sailors from more than 35 countries around the world. Watch the epic twists and turns of some serious sailing before ending the night with dancing and music.

St Maarten Open | April
A sporting highlight of the year, resident and international golfers alike are welcome to take part in this elaborate three-day tournament.

Carnival – Dutch | April – May
The Dutch side of the island spends three weeks in an attempt to out-do the carnival celebrations of the French side. Watch brightly-dressed performers dancing through the streets of Philipsburg and get involved in the party yourself at the Carnival Village.

Happy Holi | May
Herald the arrival of spring with a beautiful display on Happy Bay Beach. The ‘Festival of Colors’ celebrates community and scrumptious Indian delights..

Fête De La Mer | June
Swim, sail, surf and paddle your way to this veritable smorgasbord of seafaring events. There’s plenty of nautical nonsense for everyone to dive into off the coast of Grand Case.

Billfish Tournament | June
Head to Marigot for the exciting atmosphere of this deep sea fishing competition. One of the famous events of the Caribbean calendar, the tournament sees teams competing for the biggest catch.

I Love My Ram | July
The village of Colombier knows how to throw a celebration like no other. This prestigious pageant, steeped in folklore,  features the most beautiful goats from across St Martin. The winner of the pageant is paraded throughout the streets.

St Maarten’s / Martin’s Day | November
Christopher Colombus discovered the island in 1493, on the feast day of St Martin of Tours. Celebrate this national holiday alongside the island with sports, family days, traditional games and parades.

Holidays & Old Years’ Celebration | December
When better for an unforgettable vacation than the holiday season? Wherever you stay on the island, wave a raucous goodbye to the year and celebrate the new year with parties and fireworks.

When is the best time to visit St Martin?

Whether you’re looking for a romantic couples’ getaway or a fantastic St Martin vacation with friends, the island is a fantastic destination throughout most of the year. Our guide provides comprehensive details about the best time of year to visit St Martin so you can make the right choice for your vacation.

If you’re looking for plenty of winter sunshine and want to experience lively island energy at a popular time of year, take a trip to St Martin between December and March. A vacation during holidays is always a memorable experience.

On the other hand, avoid the crowds and enjoy some peace on the beach by traveling in early summer. The warmer weather in June or July means that you can make the most of the heat without searching far for a private spot on the beach.

Of course, the quietest on the island is actually from August to October. Although your stay might be more prone to scattered showers, some may prefer a completely different view of this wonderful Caribbean island.

The best time to visit St Martin are the golden months of April through June. These months offer the best of sun, clear skies and a slice of serenity.

Ready for a Caribbean vacation? Top Villas has an array of fabulous luxury villas in St Martin to choose from that are bound to be an unforgettable stay.

Exciting Caribbean Nightlife – Things to do in St Martin 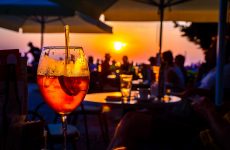 Things to do in St. Martin and St. Maarten 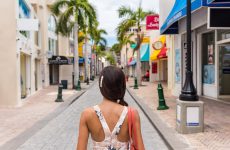