Blog > Florida > Orlando > When is the best time to visit Florida?

You’re dreaming about your next vacation and the Sunshine State is right at the top of your wish list. But when’s the best time to visit Florida? Our simple month-by-month guide will help you plan the perfect trip.

Your whole experience of Florida will change depending on the time of year that you choose to visit. Go in the middle of high season and the beaches, theme parks and attractions will be at their busiest and best. Visit at other times of the year and you’ll be able to enjoy lower prices, shorter queues and much smaller crowds. Read on to find out more about the best time to visit Florida.

The weather in Florida and when to go

The weather will have a big impact on your experience of Florida. Although the state is famous for its warm climate, temperatures can vary a surprising amount throughout the year (and depending on which area you visit). So whether you’re planning a golfing vacation or a once-in-a-lifetime tour of Orlando’s theme parks, it really pays to plan ahead.

Weather-wise, the best time to visit central parts of Florida such as Orlando and Kissimmee is from January to April. There’s little rain and the temperatures are warm, but not uncomfortably so.

Crowds at attractions like Disney World and Universal Studios are also fairly low, though there are exceptions (hello, spring break).

Visit during the summer and you can expect the weather to be hot and humid, with highs of around 92 F (33 C). The rainy season begins to kick-in in June and last through early October – this is the best time to visit for lower prices.

In South Florida and the Florida Keys, the best time of year for dry weather and buckets of sunshine is the winter and springtime (roughly December to April).

Unsurprisingly, these months are also the most popular among tourists visiting southern destinations like Miami, Naples and Marco Island, but it is still possible to bag great last-minute deals on vacation rentals.

The summer in South Florida (June to September) is hot and humid with plenty of big rainstorms, but prices are considerably lower than they are in high season.

If you love the sunshine (but not too hot), the best time of year to visit South Florida is April – it’s your best bet for a dry stay, with a good compromise of warm temperatures too.

Northern parts of Florida tend to be considerably cooler, which makes summer a popular time of year to visit. Winter temperatures range from mild to surprisingly cold. Snow is not exactly common, but it has been known to fall.


Villas in Orlando from just $17 per person, per night! 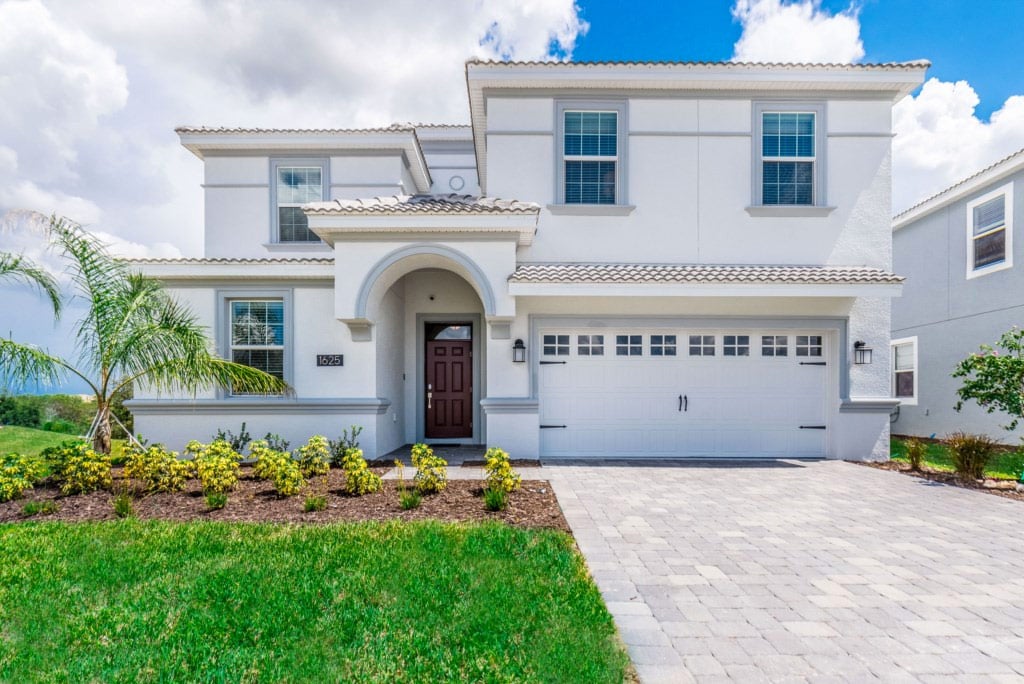 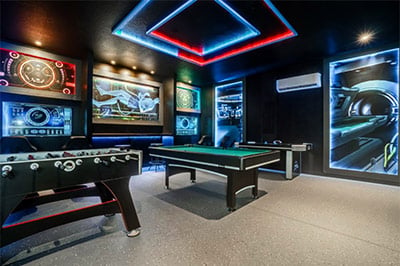 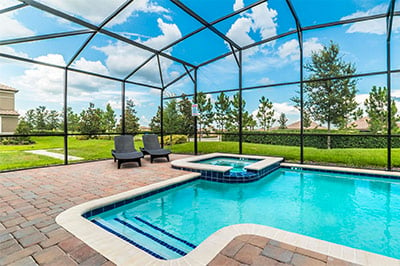 When is hurricane season in Florida?

Florida’s hurricane season runs from June to November each year, peaking between mid-August and mid-October.

It’s very hard to predict the number of hurricanes that will actually make landfall in a given year, however – and even if you visit during those months, there’s a very low risk that a hurricane will affect your vacation.

If you’re planning a trip to Florida in August, September or October you might consider paying a little extra for travel insurance on your flights. This way, even if a weather-related emergency cancels your plans, you’ll get a full refund or equivalent rescheduling.

When to visit Florida, month by month

January is the coolest month of the year in Florida, with average lows of around 49 F (around 10 C) in Orlando. However, temperatures in the middle of the day can hit 74 F in the Florida Keys (around 23 C), making it possible to spend plenty of time exploring the great outdoors.

Across Florida, temperatures begin to edge upwards in February. The beaches begin to attract sunseekers from across the USA, while the colorful Mardi Gras celebrations get underway at Universal Studios in Orlando. If you’re in Florida at the end of February, sure to check out the Daytona 500, Nascar’s most famous and action-packed event.

Dry and sunny, March signals the arrival of spring in Florida, and is a great month for sightseeing. Try the International Flower and Garden Festival at Epcot in Orlando, or the Downtown Naples Festival of the Arts. We can’t write about March without mentioning spring break, which sees students heading to Florida’s beaches and resorts for a week of fun.

April is a great time to visit Florida. The days begin to feel longer and brighter and the weather warms up a lot, hitting around 81 F (27 C) in the Florida Keys. Despite this, there aren’t any of the big crowds associated with visiting Florida in high season. Local events include the Fort Myers Beach Film Festival and the lively Siesta Fiesta arts festival in Sarasota.

May marks the start of the warmest part of the year, and is a good time to visit Florida. Crowds at blockbuster attractions like the Magic Kingdom and Universal Studios are manageable, at least until Memorial Day, when things get a little busier. Heading to Orlando? Make a trip to the Orlando International Fringe Theater Festival, which showcases musicians, dancers and artists from around the globe. 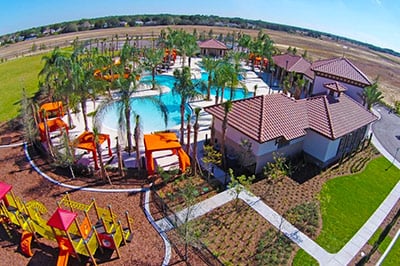 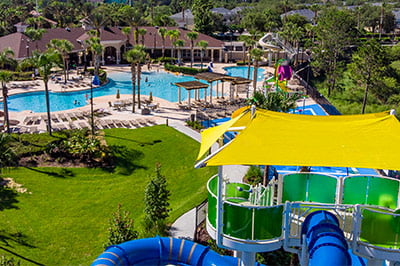 Florida’s wettest month, June see around 7.5 inches of rain falling on Orlando. But don’t let that put you off; most of that rain falls in big thunderstorms, only to be replaced by bright sunshine. Temperatures can hit 91.3 F (33 C) in Naples – perfect for lazing on the beach or chilling out at your luxury vacation rental.

Hot, hot, hot! Florida swelters in July, with high temperatures right across the state. The good news is that there are some great deals on vacation rentals – and you can easily cool off at the beach or the water park. If you’re visiting early on in the month, make sure you make a trip to one of Florida’s big cities for the wild 4th July celebrations.

Whether you’re visiting Florida for the wildlife or the nightlife, August is sure to deliver hot weather. Pack sunscreen and be prepared for a quick storm or two. The theme parks can be crowded in August, especially at the start of the month before the kids head back to school, but things get quieter as the month rolls on. 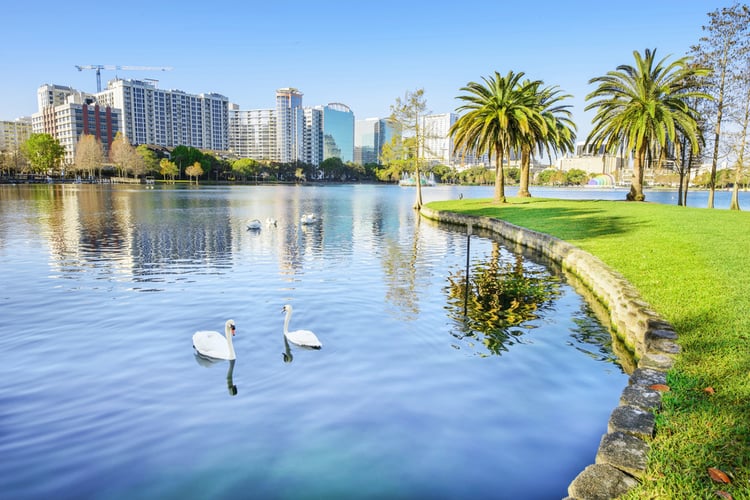 Florida’s heat begins to let up a little in September and, after the Labor Day celebrations, the summer crowds start to subside. Most of Orlando’s main attractions will still be open though, making this a good time of year to visit. There’s plenty of rain, but most of that falls during thunderstorms.

If you’re looking for good weather and relatively crowd-free sightseeing, October is one of the best times to visit Florida. Temperatures average around 72 F (22 C) in places like Orlando and Kissimmee, with less and less rain as November approaches. Look out for Halloween-themed events at attractions across the state.

November is the driest month of the year in Orlando, and compared with the downpours of the wet season, showers are few and far between in Miami and the Florida Keys. Temperatures are also considerably lower but it’s still warm enough for swimming across southern parts of Florida (especially at the start of the month). November events include the International Film Festival in Fort Lauderdale, which runs for 17 days.

December is one of the coldest months of the year in Florida, but that doesn’t mean you’ll be shivering on vacation. Temperatures regularly hit 72 F (22 C) in Orlando and can soar as high as 77 F (25 C) in Fort Lauderdale. Look out for the magical holiday parades taking place across the state.

The climate charts below will give you an idea of the best time to visit Florida. We’ve picked Jacksonville, Orlando and Key West to show how the weather changes from north to south. 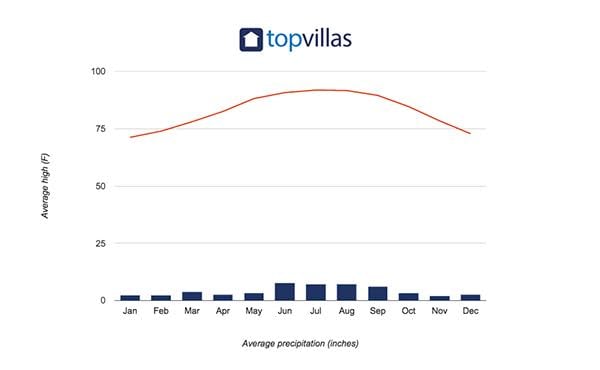 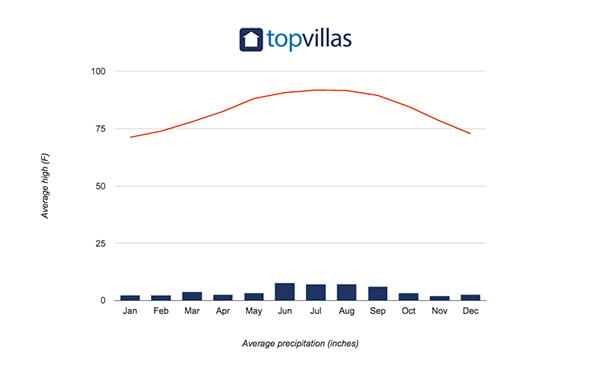 Condos in Orlando from just $14 per person, per night! 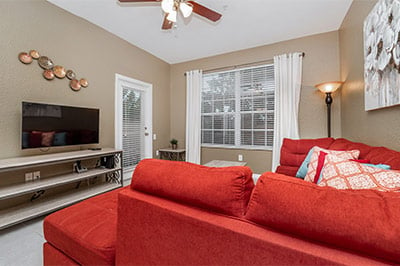 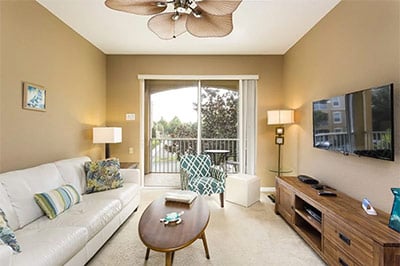 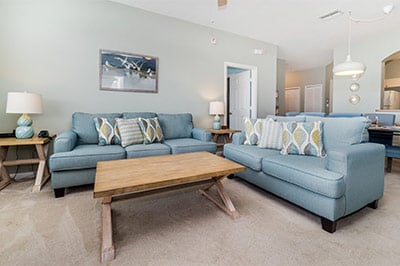 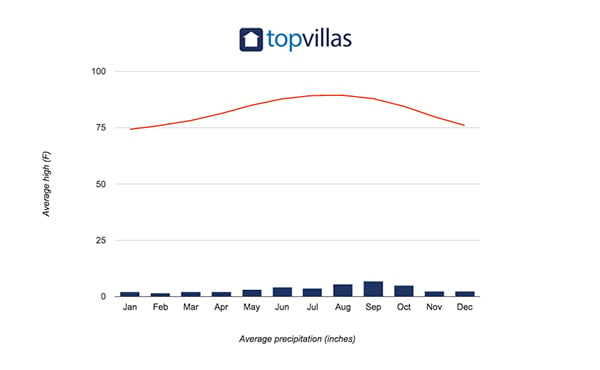 The best time of year to visit Florida’s theme parks 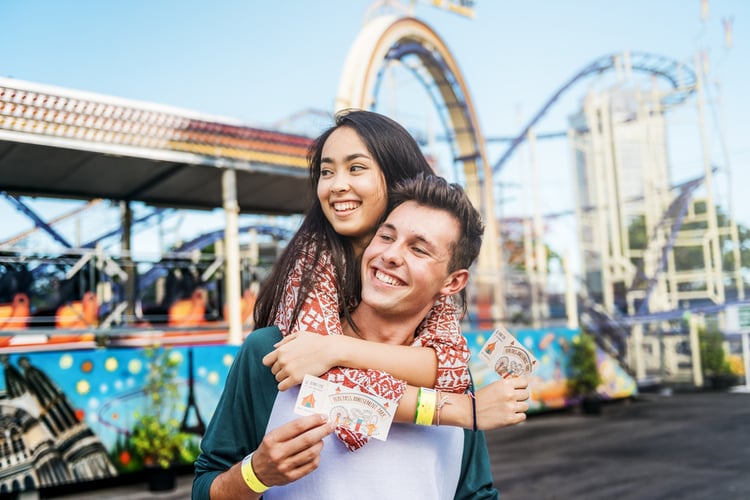 The weather is only one consideration when visiting Orlando’s big attractions. You should also think about the possibility of crowds, which tend to peak when the kids are off school.

A good option is to visit during one of the two shoulder seasons, which run from April to May and September to November.  There’s a good chance of warm, comfortable weather and – if you avoid any seasonal school breaks and holidays – the queues at water parks and theme parks are much smaller.

Some attractions close during the winter but lots of the main ones stay open right through the year, ensuring that you have plenty of things to do regardless of when you visit Florida.

If you want to avoid big crowds, consider visiting outside of school breaks and national holidays. It’s also worth thinking about the kinds of events that are taking place at the parks during your trip – is there a special Halloween celebration you want to check out, or a major convention that’s going to make the theme parks busy?

Low-season offers are easy to find in some of Florida’s best resorts, including Windsor Hills, Reunion Resort, Champions Gate and The Encore Club. While prices for hotels and vacation rentals tend to go up in high season, you can still get some great last-minute deals in Florida.

Check out our latest deals in Orlando, or browse through all of our Florida vacation rentals to find your dream hideaway.

Top Villas offers a fantastic choice of luxury vacation rentals worldwide. United States, Asia, Caribbean and Europe — wherever you choose for your next vacation, we'll have a luxury villa to suit your needs. Browse our vacation homes now.