Blog > Disney News > The Disney World 50th Anniversary plans — brought to you by Yaz and Ash! 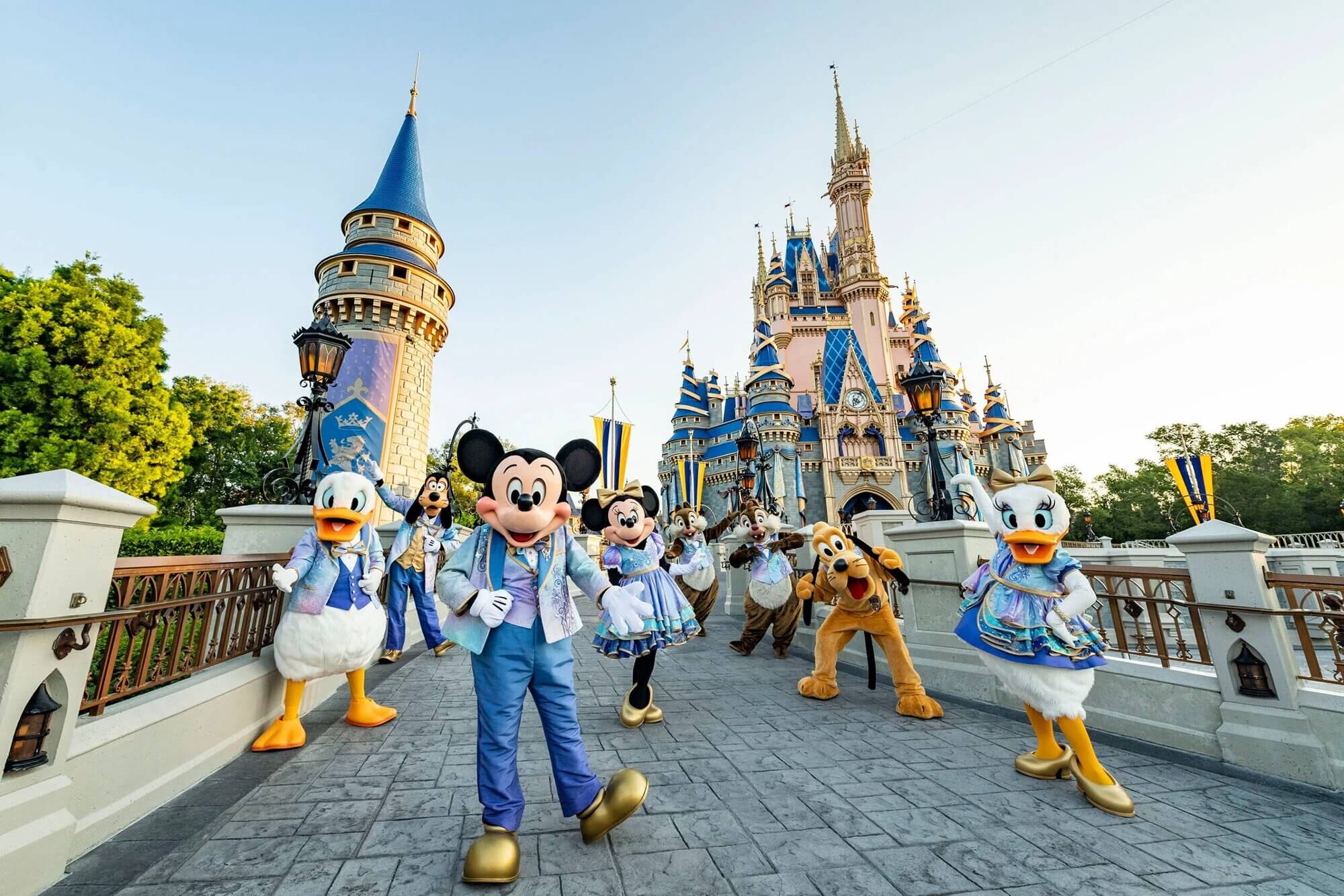 This week our Brand Ambassadors Yaz and Ash are excited to be bringing you the top Disney World 50th Anniversary highlights for Orlando. Get ready to party!

Top highlights for the Disney World 50th Anniversary in Orlando

Kicking the celebrations off with a bang will be Disney’s Enchantment firework display. From October 1st, the ‘World’s Most Magical Celebration’ promises spectactors a show-stopping performance. Centred around Cinderella’s Castle, the epic nightime display will also extend down Main Street, U.S.A for the first time! Spectators will quite literally be surrounded by the magic. As you watch on you can expect to be spellbound by Disney music, fireworks, enhanced lighting and immersive projection effects. A purely enchanting experience and one not to miss. Make sure you catch it during the 18-month long celebrations.

Also bringing the Disney’s 50th Anniversary celebrations to life this 1st October, is Harmonious at Epcot. This ambitious pyrotechnic display is set to be one of the largest nightime spectaculars ever staged at Disney. In short, prepare to be wowed! The whirlwind performance will take place on the World Showcase Lagoon. The epic fireworks, moving fountains, state-of-the-art illimuniations and incredible visual effects will be performed on a gigantic multimedia stage, built on 5 floating barges. Ranging in length from 30 – 75-foot long, the huge scale of the Harmonious stage set is like nothing ever seen.

Expect music and visuals from your favorite Disney films. From the classic 90’s movies to the modern day, spectators of all ages will be transported to a magical world of possibility. Staying true to the park’s ethos on ‘edutainment’, the music scores and visuals will be reimagined and performed by a global group of musicians and artists. The daytime will also see awesome fountain effects in motion from the stage set, for a whole new focal point on the lagoon.

An amazing daytime display is also set to the take to the skies  — in the form of the Disney Kite Tails. This impressive performance above the Discovery River Amphitheater will run from October 1st. Featuring some of your best-loved Disney characters as all-action kites, watch them soar and come to life up in the clouds. Dancing with windcatchers to some of the most popular Disney music, you’ll be able to spot everyone from Lion King’s Simba and Yazoo to the Jungle Book’s Baloo! With some of the high-soaring Disney kites up to 30-feet long, they’re set to take pride of place in what will be the ‘World’s Most Magical Celebration’.

Another highlight Yaz and Ash are looking forward to seeing is the re-imagining of the 4 parks’ most iconic sights. Set to be transformed are Cinderella’s Castle at Magic Kingdom, the Tree of Life at Animal Kingdom, Spaceship Earth at Epcot and the Hollywood Tower Hotel at Hollywood Studios. Yaz and Ash are especially looking forward to seeing an enhanced, magical version of the Tree of Life.

Decked out in an irridescent glow and pixie dusk which Disney like to call ‘beacons of magic’, you can soak up the magic from whichever park you find yourself in!

Another note-worthy highlight is Cinderella’s Castle, which is now ready to go to the ball. Cinderella’s castle is adorned with decadent drapery, embellished bunting and gold swirls for the special occasion. And the finishing touch? A 50th Anniversary crest of course! This much-loved icon at Magic Kingdom is now fit for royalty and ready to oversee the 18-month long celebrations. Feel the magic and enjoy!

Touring Magic Kingdom throughout the day will be the hosts of the ‘World’s Most Magical Celebration’, Mickey Mouse and Minnie Mouse. Along with their friends, they’ll be donning fancy new ‘EARidescent’ costumes, to mark the Disney World 50th Anniversary. Also dressed to impress will be Donald Duck and Daisy Duch, Chip ‘n’ Dale, Goofy and Pluto. Where can you spot them? At the brand new ‘Mickey’s Celebration Cavalcade’ of course. Get ready to party!

Making their debut across all 4 theme parks will be 50 golden Disney sculptures. The series of famous faces will create a great sense of interest for all ages across the parks, particularly as they are planned to be interactive in some way. More information will be released soon, so stay tuned!

Yaz and Ash also gave an honorary shout out to the much-anticipated new Ratatouille ride, at Epcot.

Due to open on October 1st, the French Pavilion will be the go-to destination for fans of the loveable rodent chef. Already big fans of the ride at Disneyland Paris, Yaz and Ash cannot wait for the unique ride to serve up a main course of fun at Disney World Orlando!

Where to stay in Orlando

When looking where to stay, our Orlando villas and condos near Disney paint the scene for a fun family vacation. Equipped with luxury amenities, you can select everything from private pools and themed rooms to game rooms and bowling alleys.

With the majority also offering access to on-site resort amenities and a Disney shuttle service, enhance your vacation today with a Top Villas stay.