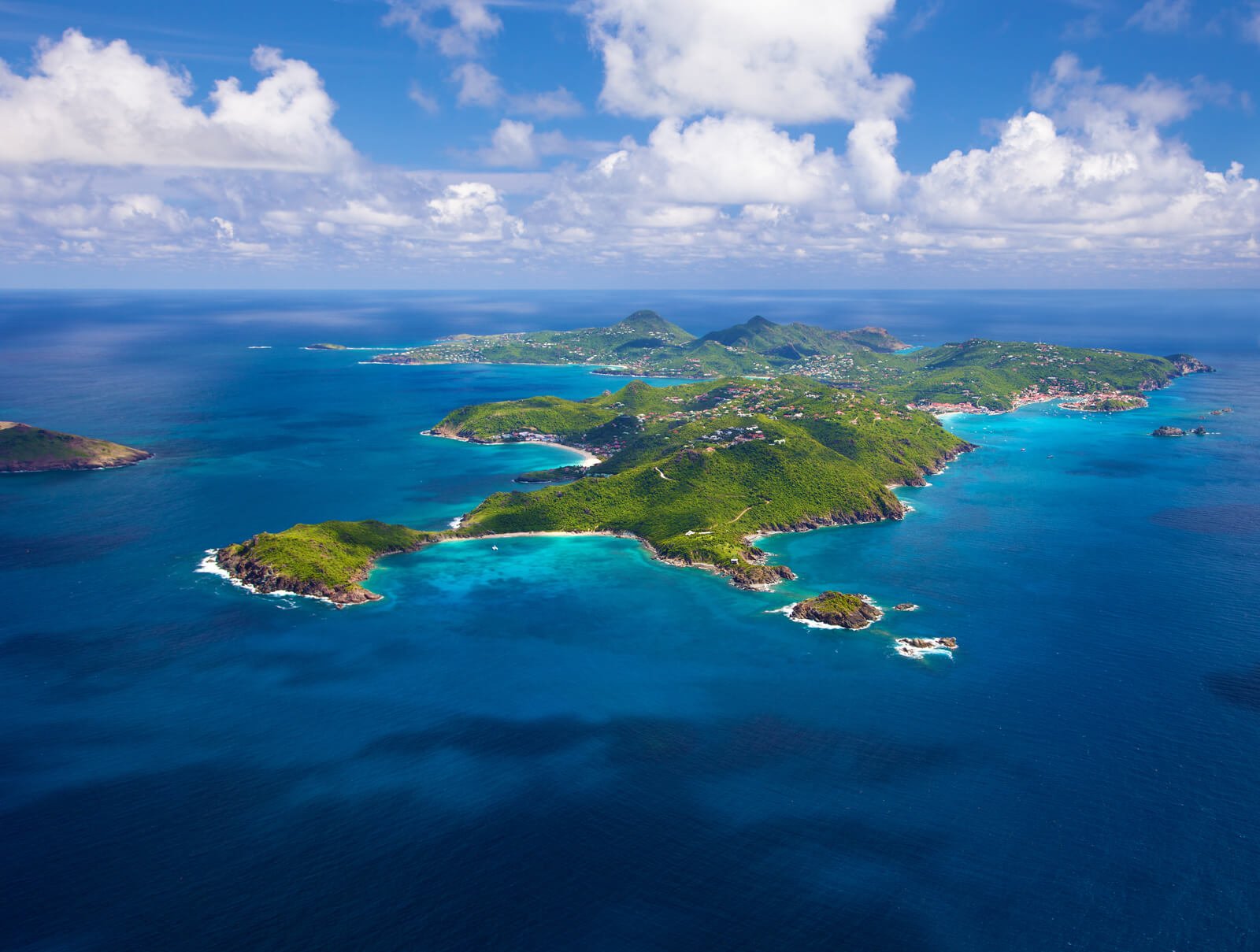 From its red-roofed capital, Gustavia, to the lush green hills overlooking exceptional beaches, St Barts is a fabulous luxury destination in the Caribbean. But when is the best time to visit St Barts?

Located 22 miles south-east of St Martin, St Barts – also known as St Barths, Saint-Barth or, officially, as Saint Barthélemy – is a small island paradise with an area of 9.6 square miles (25 km²). This hidden gem of the Caribbean is known as a vacation hideaway for the rich and famous. Warm winter months make it a popular destination for those looking to escape the colder weather, but is this really the best time to go to St Barts?

There are plenty of factors to consider when planning the best time to visit St Barts. Our comprehensive guide to the island explains the best weather by month and times to be avoided during St Barts’ hurricane season. We also provide a calendar of events and a breakdown of the busiest times of the year.

When is the best time to visit St Barts for great weather?

The island has a mild climate all year round. Typically temperatures vary no more than 5 degrees between the high- and low-80s (around 30°C), boasting a perfect beach temperature. St Barts’ temperate climate seems ideal but it’s also important to remember that the rainier season might put a dampener on your plans. The wetter months are in the fall during the hurricane season whereas the driest time is between January and March. Most tourists visit St Barts in the early part of the year, but miss out on the warmer temperatures of the spring and summer.

St Barts’ golden months are between April and June which make the most of the warmer weather with less rain than the latter half of the year.

When is St Barts’ hurricane season?

The Atlantic hurricane season officially starts in early June and lasts until the end of November. However, overlooking May showers, St Barts doesn’t experience particularly heavy rainfall until mid-August.

The likelihood of a hurricane directly hitting any of the Caribbean islands is quite slim, but nearby hurricanes can increase the precipitation on St Barts. Having said this, St Barts did suffer destruction in 2017 when Hurricane Irma devastated the island. Despite the flooding of the harbor and the damage to hotels on St Barts, Irma didn’t take any lives. In truth, hurricanes rarely hit the island and the probability of you experiencing one during your vacation is very low.

The first month of the year falls during the island’s dry season, which extends into early spring. Although not as busy as the festive holidays, due to the clearer skies, January is a very popular time of year for luxury vacationers living in the northern hemisphere looking to avoid the winter chill.

The temperature in St Barts in January is, on average, around the low 80s (around 28°C). This is mild enough for sunbathing and warm alfresco dining but those looking to take a dip in the cool Caribbean waters may find the early summer weather to be a more comfortable alternative to St Barts’ water temperature in January.

Typically the driest of the year, February is the best month for those who want to make the most of St Barts’ sunshine, with little chance of rain. With an average of around 2 inches (51mm) of precipitation, rainy days in February are few and far between.

Be aware though, like the other winter months, February averages lower temperatures and the fairer weather comes at the cost of larger crowds.

The end of the high season maintains the cool and dry outlook of the earlier months. For March, expect similar moderate temperatures and the same arid climate as in February.

In April, the island’s high season ends, as does its dry spell. However, the prospects of rainfall are still relatively low, making this a great time to visit as the crowds thin out.

In addition, the temperatures begin to rise towards the mid-80s (around 29°C). The combination of warmer weather and continued lack of rain awards April as a favorable month for trips to St Barts.

May in St Barts

May marks the beginning of the low season and less tourism on the island. On average, precipitation levels peak in this month towards 4 inches (102mm) of rainfall. Nevertheless, one can expect fewer wet days than those spent laying in the sun.

Benefits to traveling to St Barts at this time include the rising temperatures, usually in the upper 80s (around 31°C), and ‘les soldes’ (St Barts’ annual sales). As a territorial collective of France, the island holds annual sales where you can enjoy large discounts on luxury products.

As the Atlantic hurricane season starts in June, St Barts begins to get quieter. Realistically, the wetter days on the island fall later in the year and June has a much lower chance of rain than the previous month.

Temperatures are some of the warmest throughout the year, so for St Barts’ weather, June has arguably the best. A majority of the shops and restaurants still do business in June so this is a great summer month for a Caribbean stayover.

Alongside August, July is the hottest month. Averaging nearly 90°F (33°C), the summer promises to be scorching hot. We definitely recommend sunscreen!

At an average of 3 inches (76mm), July doesn’t have a particular heavy chance of rain either. This may lead you to wonder why more people don’t take advantage of the St Barts’ weather in July. The reason – most businesses on the island begin to close during the summer so business owners can enjoy their own vacation and make necessary renovations. If you don’t mind the quiet life, July may be the month for you.

Even though it’s a popular month for vacationing Europeans, the rainy season begins to set in during August. Precipitation averages 4 inches (102mm) or more in this month, so despite the high temperatures, there are fewer days to enjoy your time on the uncrowded beach.

September is not the best time to visit St Barts. It is firmly the worst month for St Barts’ weather and fall is generally a bad time to travel to the island. Hurricanes lead to high levels of precipitation, averaging over 5 inches (127mm).

Despite this, the high temperatures of the previous months continue into September and, if you find a business open, you’ll be rewarded with a great discount. Regardless, we don’t recommend taking a vacation at this time of year.

St Barts’ weather in October isn’t much better than September. Also, the temperature begins to drop as the winter nears.

It’s worth noting, though, that rain in St Barts comes in the form of frequent, but quick, showers. There’s less likelihood of prolonged rainfall.

Hurricane season ends in late November and the rainfall begins to lessen. Despite this, the first few weeks of St Barts’ weather in November remain very much rainy but without the chart-topping temperatures of the summer months.

As the holidays approach, the island breathes new life, ready for the high season.

December is the busiest time for a vacation in St Barts. The temperature tends to be warmer than the earlier part of the year, once again resting in the mid-80s (around 29°C). The rains haven’t completely blown away, but with the dry season on the horizon, expect 3 – 4 inches (76 – 102mm) of rain.

If you’re looking to celebrate the holidays whilst enjoying better St Barts’ weather, December is a fantastic choice for your vacation.

When is the best time to visit St Barts for events?

The beautiful St Barts’ Caribbean weather may not be your only reason for choosing a time for your vacation. There are plenty of events throughout the year that may sway your decision one way or the other. Some of the more popular dates include exciting carnivals, festivals, boat races and feast days. See below for St Barts’ calendar of events:

Holidays & New Year’s Eve | December
An unforgettable way to spend the holidays and ring in the new year.

When should you book a St Barts vacation?

You should carefully consider when to book your vacation and decide for yourself the best time to visit St Barts. Traveling in the fall is the best way to avoid the crowds but September and October are in the middle of hurricane season – your quiet vacation will leave you a little soggy.

For a drier stay in the Caribbean you might decide to visit Saint Barthélemy in the early part of the year. Be advised, though, that the beaches may be a little crowded as the winter months are the busiest time, especially during the December holidays. On the other hand, if you don’t mind the crowds and are looking for a party atmosphere, the high season might be the choice for you. We recommend booking well in advance to secure one of Top Villas’ luxury St Barts’ vacation rentals.

The discerning vacationer may be looking for a little slice of everything. In which case, the best time to go to St Barts is between April and June. These months have the best combination of warm weather, open skies, local business and some peace and quiet.

Looking to book your St Barts’ vacation? Top Villas has a fantastic selection of luxury St Barts villas which would make a great destination for a relaxing Caribbean getaway.